No Result
View All Result

US – UK want SL to follow Constitution, refrain from violence

US want SL to follow Constitution, refrain from violence

The United States a short while ago called on all parties in Sri Lanka to act in accordance with the Constitution, refrain from violence and follow due process.

In a tweet, the Bureau of South and Central Asian Affairs of the US Department of State said it was following the events in Sri Lanka.

“We expect the Government of Sri Lanka to uphold its Geneva commitments to human rights, reform, accountability, justice and reconciliation,’ it said.

The tweet followed the appointment of former president Mahinda Rajapaksa as the Prime Minister of Sri Lanka.

All parties and competent authorities in Sri Lanka should respect the Constitution and follow due political process, British State Minister for Asia and Pacific Mark Field said.

He said the UK was following the latest developments in Sri Lanka closely and with concern.

Meanwhile, the Government of UK updated its travel advisory on Sri Lanka yesterday.

It said there are reports of rapid political developments in Sri Lanka.

“You should exercise vigilance and avoid all demonstrations or large political gatherings. We will continue to monitor and update Travel Advice as appropriate,” the UK Foreign Office advised British citizens. 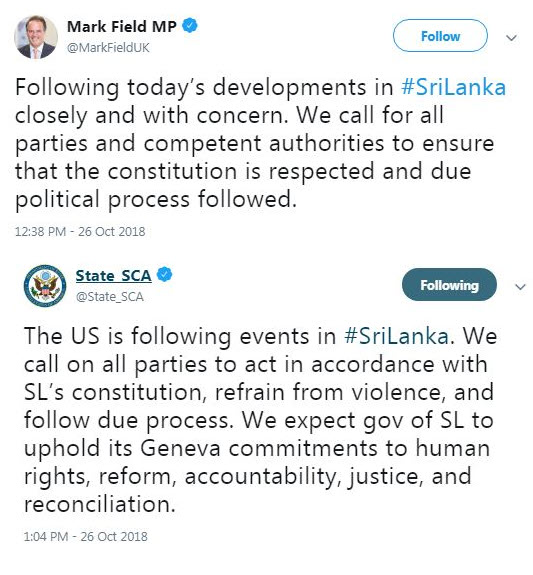 Tags: _By dailymirrorFollow ConstitutionUnited States Department of State
Next Post

No Result
View All Result